A little bit of Phil's Hill at the Grand Canyon 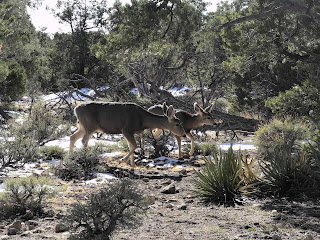 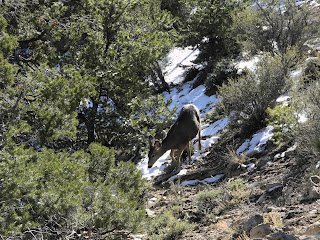 A few hours after I emerged from the Canyon my parents were here and snow was falling. My mother had been here once before - although almost a lifetime ago - my father had never been. We settled in for a cozy evening of listening to the wind blow and commenting on the white out that took away our view of the Canyon.
The next day, under a blue sky, my parents and I set out along the rim to explore. The freshly fallen snow made plain the wanderings of the mule deer that live in the area - a site more interesting than that of the canyon in the eyes of my father. The tracks drew him away from the rim, into the woods. He'd separate from my mother and I for stretches to pursue the deer. His efforts turned up fruitless. He could not find the deer that he knew to be lingering in the area. That is, until, with his attention drawn back to the canyon, a small herd walked across the trail right in front of him. For the next day and a half the deer were much less elusive. We saw tracks on the rocky cliffs below the rim and not long after saw the deer responsible for the hoof prints.
Funny, how my father seemed less interested in the vista than the details right around him. I didn't realize I had inherited that from him.
Posted by Michele Lauriat at 5:25 PM